Alpine meadows, mountain peaks, mountain streams.
Follow in the footsteps of Bavarian Fairytale King Ludwig II, a man shrouded in legend. You will pass the most important places of his life as you travel along this incredibly scenic route through Upper Bavaria. 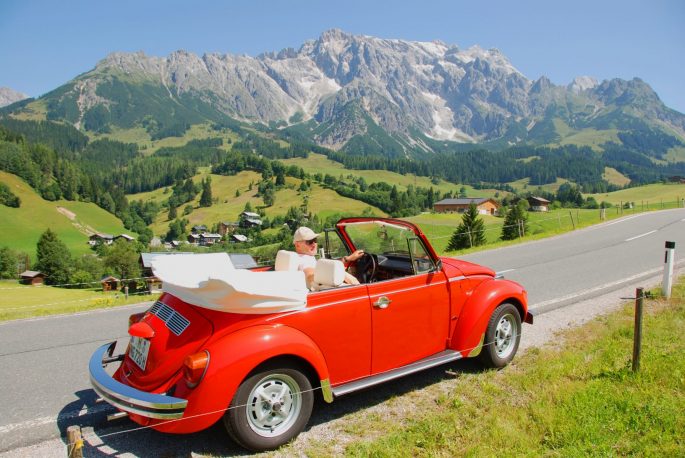 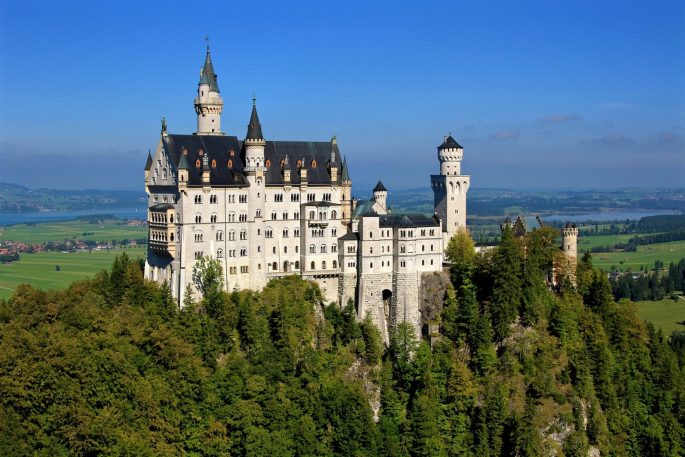 Your Car – the VW Beetle
There are some automobiles that are destined to be classics. It might be because of their design, maybe their racing success, or because their engineering was before its time. Very rarely will history play a trick, and let an automobile, already mature in its construction, become more attractive, and win over people until it is no longer possible to imagine life without it.
The Volkswagen Type 1, better known as the VW Beetle, is one of these rare examples. Not the icon for high earners, it was a symbol for a country looking into the future but falling back on earlier virtues such as German workmanship and engineering.

VW Beetle has always evoked fun, laughter, friends and family and is iconic in it’s own way in New Zealand. Now enjoy it through parts of Europe, through quiet country roads, sleepy villages or visiting majestic castles.

Day 1:
Neuschwanstein: Knights & Tales
This two-day tour begins in Munich and will take you from the Starnberg Lake and then on to Hohenschwangau, where you will see Neuschwanstein Castle,  probably the most famous of the royal castles of Bavaria. You will then approach the impressive fairytale castle on foot along the path from the bottom of the castle hill. Neuschwanstein was planned by Ludwig II as an accessible stage setting and private residence. The castle merely provided space for the king and his servants, not for the royal household. His passion for the world of legend and the music of Richard Wagner are the reasons why Neuschwanstein was constructed and almost all the rooms include backdrops depicting Lohengrin and Tannhäuser. You will then travel on to Linderhof Palace. This comparatively small Rococo jewel is the only one of the buildings which Fairytale King Ludwig II completed and inhabited. Your journey for the day will take you past Kochel am See and Benediktbeuern. Heading further east, you will then arrive at Bad Tölz, where you will continue your journey past the Tegernsee and Schliersee. In the early evening, you will arrive at Lake Spitzingsee (1,085 m elev.) and stay at the Alpenhotel am Spitzingsee****, where you can relax in the Altira Spa. Your dinner will be served in a manner perfectly in tune with your trip in the hotel’s own “König Ludwig Stube”.

Day 2:
Herrenchiemsee: The Bavarian Versailles
The next morning, you will head out to Chiemsee after breakfast. From Prien, you will take a boat to Herreninsel, where you can see Herrenchiemsee Palace, the Augustiner Chorherrenstift and the King Ludwig II Museum. Herrenchiemsee Palace was modelled on the Palace of Versailles in France and aimed to reflect the ostentatious pomp and splendour of the rule of its great idol, French “Roi Soleil” Louis XIV. Herrenchiemsee was the king’s last great building project and remained largely incomplete as no further construction work took place after Ludwig’s death in 1886, after eight years of construction. Although unfinished, Herrenchiemsee is one of the finest palaces in Germany and home to the King Ludwig II Museum. When visiting the construction site for the new palace, Ludwig used to spend the night in the Chorherrenstift, the old palace. Today, you can see the private chambers of the king and the impressive Kaisersaal here. You will then travel back to Prien by boat and finally head back to Munich across the Southern Bavarian countryside.

Includes
* Nostalgic VW Beetle 1303 Convertible for you to drive, including fully comprehensive insurance (an excess of EUR500 applies)
* 1 night accommodation at Hotel Edelweiss in Berchtesgaden, including breakfast
* 1 dinner
* Welcome gift

Terms & Conditions
Terms & Conditions
Prices shown unless otherwise stated are in NZ$, and are subject to currency fluctuations and are for payment by cash, Eftpos, direct deposit or cleared cheque only.  Credit Card payments are also accepted but will incur a small surcharge, please enquire.   Price includes Nostalgic Driving Experience Tour and Inclusions as shown. Drivers must be 25 years or older, and held a full NZ driving licence for a minimum of 5 years. Car Insurance carries a EUR500 excess. Gratuities for your tour leader(s), are not included and are at your discretion. A 20% Tour deposit due immediately upon booking confirmation. Prices are subject to change and currency fluctuations without notice. Additional payments are required for any additional arrangements made, please discuss with us. Any amendments to tour dates will incur a minimum fee of EUR50.00. Cancellation fees for tour start at 125 days prior to commencement of tour date, full details available upon request. Prices correct as at 08 March 2022 and are subject to change or withdrawal without notice. In the event of Covid-19 impacting this package to any extent, please contact Sport Escapes. Other conditions may apply. NDE.