The outback of the Côte d’Azur towards the Rhône basin, the Luberon wine region and the limestone rocks of the Alpilles, medieval Avignon and roman Arles: all this seems created on purpose for an exciting classic car tour. Add to this mighty Premonstratensian and Cistercian Abbeys in the midst of oak forests or blooming lavender fields, impressive military roads dating back to Napoleon and carved into the rock, the Camargue wild horses and the Verdon canyon. This is pure Provence and France at its best! 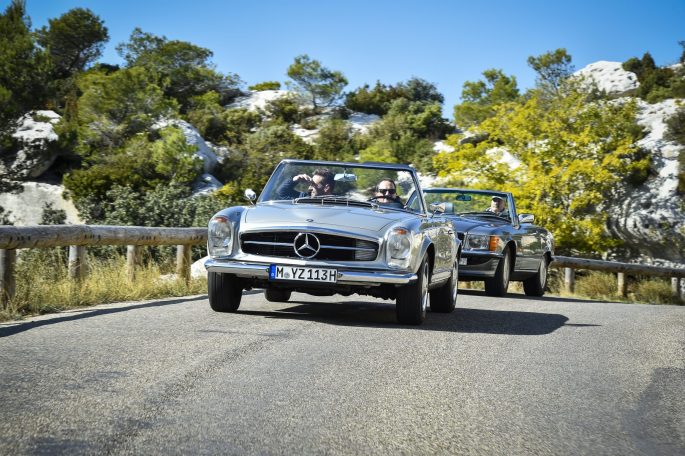 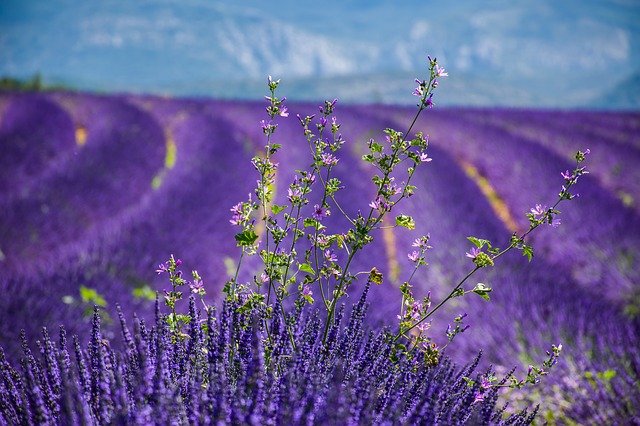 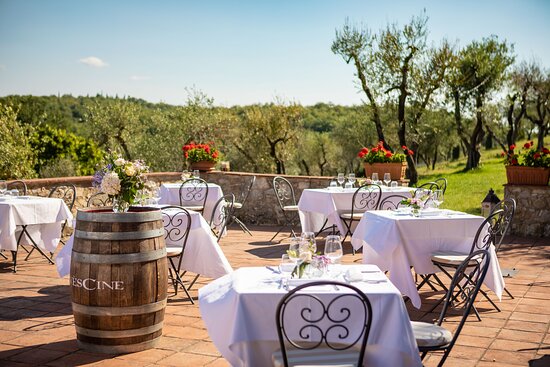 Your Car
Success in motor racing has always been part of the Mercedes-Benz DNA. The same is true even of the birth of Mercedes brand name. At the end of the 19th-century Emil Jellinek, a businessman who sold Daimler vehicles to the European aristocracy and high society, created a racing team. The racing team was equipped with Daimler cars and were gifted with the name of his daughter: Mercedes.

On this tour you will enjoy driving either a Mercedes-Benz SL (R-107) or a SL (W 113) Pagode. What better way to live the Mercedes-Benz lifestyle as you  experience Italian and French settings and drive on the dreamy roads of Provence and Tuscany.

You will get the chance to meet your fellow travellers at our introductory get-together in the hotel. Outside in the warm sun, the shimmering chrome classics sparkle and await for you. As an introduction to the tour, you can get accustomed to the Roadbook while driving on winding country roads, through pine forests, and along white sandstone formations. The goal of this drive is the areas around the picturesque Salon de Provence. The small and cozy village of Pélissanne is one of the most beautiful villages in Provence and is perfect for our first coffee stop in Provence.

Pure Provence is the theme today on an itinerary which seems taken off a photo book. Crossing the Alpilles past the Abbey of Saint-Michel de Frigolet, we reach the Rhône and head north towards Avignon. Few medieval towns have reached modern age similarly well conserved with a surrounding intact wall, an amazing legacy of buildings and history. Avignon is known for hosting the Pope during the great Western Schism of 1309 to 1423, and we will explore the town at the hand of a knowledgeable guide. After lunch, the route leads north-east into high Provence with its small canyons, hills and blossoming lavender fields. Tiny little villages on the way offer plenty of coffee stop and shopping opportunities, before arriving at the village of Gordes. The latter is perched up on a rock overlooking the Luberon almost like a watchman, a perfect scenery.

Today’s drive is much about nature and the perfume of the land rather than the thrill of speed. The delta of the river Rhône marks the extension of the Camargue marsh land, which has long been a nature reserve for flamingos, provencal bulls and most famous, the white Camargue horses. Did you know that they are the only horse breed able to graze under water? You will be able to watch them closely before visiting Arles and its majestic arena and some more Roman remains during your guided walk through town.

Departure day’s highlight will be the extensive lavender fields southeast of Gordes and the itinerary ‘castles of the Luberon’ including Château de Lourmarin. Today, you will be crossing the notorious Durance river several times, which in the old days has been referred to as one of the three scourges of Provence (the other two being the Mistral and the Aix-en-Provence parliament). You will return the cars back at the hotel during early afternoon, just in time for your airport transfer.

Includes
* Transfers from/to Marseille Airport to your hotel, as well as on location
* Nostalgic Mercedes-Benz SL (W113 and R107) for you to self-drive, including fully comprehensive insurance and fuel
* 3 nights at Moulin de Vernegues, Mallemort including breakfast
* 1 lunch and 1 dinner
* Admission fees and guided sightseeing as per itinerary
* English speaking guide and service team during the entire trip
* Road book

Dates do not suit but still interested?
If you have 8 or more people interested we can customise the date and set up a private tour!

Or register your interest now for 2023!

Terms & Conditions
Prices shown unless otherwise stated are in NZ$, and are subject to currency fluctuations and are for payment by cash, Eftpos, direct deposit or cleared cheque only.  Credit Card payments are also accepted but will incur a small surcharge, please enquire.   Price includes Nostalgic Driving Experience Tour and Inclusions as shown. Drivers must be 25 years or older, and held a full NZ driving licence for a minimum of 5 years. Car Insurance carries a EUR500 excess. Gratuities for your tour leader(s), are not included and are at your discretion. A 20% Tour deposit due immediately upon booking confirmation. Prices are subject to change and currency fluctuations without notice. Additional payments are required for any additional arrangements made, please discuss with us. Any amendments to tour dates will incur a minimum fee of EUR50.00. Cancellation fees for tour start at 125 days prior to commencement of tour date, full details available upon request. Prices correct as at 08 March 2022 and are subject to change or withdrawal without notice. In the event of Covid-19 impacting this package to any extent, please contact Sport Escapes. Other conditions may apply. NDE.